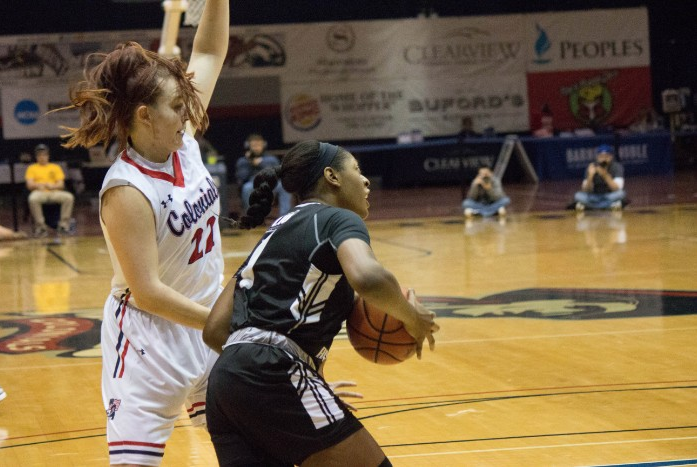 It was a game to forget for the Robert Morris University women’s basketball team, as the Colonials fell to the Red Flash of St. Francis, 70-55, at the Charles L. Sewall Center in their Monday matinee showdown.

In a first half which only saw the Colonials shoot 25 percent from the floor (6-for-24) and 30 percent (3-for-10) from long range, Robert Morris fell behind early and by a large margin.

The Red Flash saw their lead get as big as 26 points in the first half as RMU saw only two players, Rebecca Navarro (2-for-3) and Megan Smith (4-for-5), make any baskets through 20 minutes of play. Most notably was Anna Niki Stamolamprou being held to zero points in the first half, going a horrendous 0-for-6 from the field with four turnovers.

Saint Francis used its full-court press for almost the entire game against the Colonials, forcing a lot of costly turnovers for Robert Morris, who totaled 16 turnovers in the first half and 27 for the game.

It was a far improved RMU team in the second half, but at that point, it was far too late for any sort of comeback. The closest the Colonials would get to a tie game in this one was a 14-point deficit; Saint Francis just seemed to be on another level the entire game.

“We got knocked down, we got hit with a right hook right there, we weren’t ready to come into the fight, high pressure,” said head coach Charlie Buscaglia. “We have to go out there every game and know that we can trust our teammates, that we are going to give it one hundred percent, that we are gonna play with a passion.

“We are always going to hold ourselves hungry and accountable and we didn’t do that today.”

The Red Flash used their fast pace of play, tendency to shoot the three and high-pressure defense to keep the Colonials off balance the entire game, as the early deficit for Robert Morris forced it to play away from its typical half-court style of basketball.

“They play a different style match up,” said coach Buscaglia. “But there are players out there that had been through this with them, so they should’ve been able to lead more when it came to playing against this style.”

With this loss, the Colonials fall to 8-9 on the season and 3-3 in Northeast Conference play, placing them tied for fifth place, a spot that requires an improvement in play if RMU wants to see themselves in postseason play come March.

But it’s still better than the team’s projected seventh place finish from the beginning of the season.

Robert Morris plays the second game of its three-game home stand against Bryant on Saturday, Jan. 21. A win in this match-up would bring the Colonials up to fourth place in the conference.