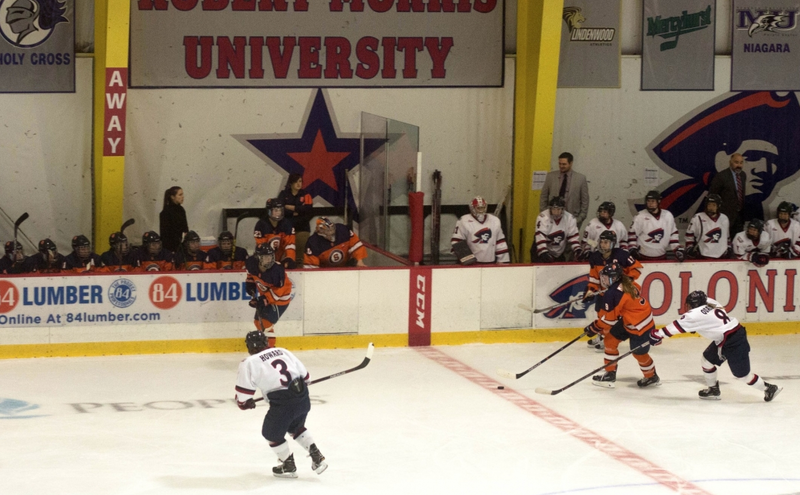 The No. 7 Robert Morris University Colonials (15-2-5) clinched a victory over their conference rival the Lindenwood University Lions (5-14-2).

Lindenwood opened up the scoring with a quick goal from forward Courtney Ganske at 5:09. An air of despair passed through 84 Lumber Arena as Colonial fans believed they were going to witness yet another loss at the hands of the Lions.

LU’s lead was short-lived, however. Forward Jaycee Gebhard batted down a deflection and lobbed it past Lions goaltender Morgan Skinner to tie up the game at one.

With that, RMU came to life. Forwards Amanda Pantaleo, Rikki Meilleur, and Amber Rennie all scored in the second period to swing the momentum permanently in the Colonials’ favor.

“It’s pretty exciting,” said Howard of her title. “However, I wouldn’t have been able to do it without the past and current Colonials.”

The Colonials rounded out the night with a power-play goal from forward Maeve Garvey in the third period.

Head coach Paul Colontino chalked the win up to what he calls “Colonial Hockey,” or playing well throughout the full 60 minutes and was impressed by what he saw from his team.

“Coming off of yesterday’s game, we felt like we could have done more,” said Colontino. “Our message for today was ‘Let’s empty the tank, and do it period after period…’ We challenged our players, and they responded in the second period with some huge goals.”

With this victory, the Colonials move to 15-2-5 on the season and maintain their status as the top team in College Hockey America. RMU currently sits three points ahead of second place Syracuse and nine points ahead of defending CHA champions Mercyhurst.

They are also currently ranked No. 7 overall in the NCAA, just behind Boston College and ahead of Colgate University.

“Our goal is to get better every day,” said Colontino on the Colonials’ strategy to staying on top. “We can’t stay static, we have to find ways to get better.”

Robert Morris will travel to Erie, Pa. next weekend for another conference series against the Mercyhurst University Lakers. Though the Colonials won their prior two match-ups against the Lakers, coach Colontino stresses that his team will not underestimate their opponent.

“It’s still early (in the season), but it’s what we’ve worked for six years,” said Colontino. “We elevated this program, and we continue to elevate it day by day. We take it one game at a time.”

Robert Morris will return to 84 Lumber Arena on Feb. 10 for a conference series against RIT after a two-week road trip.