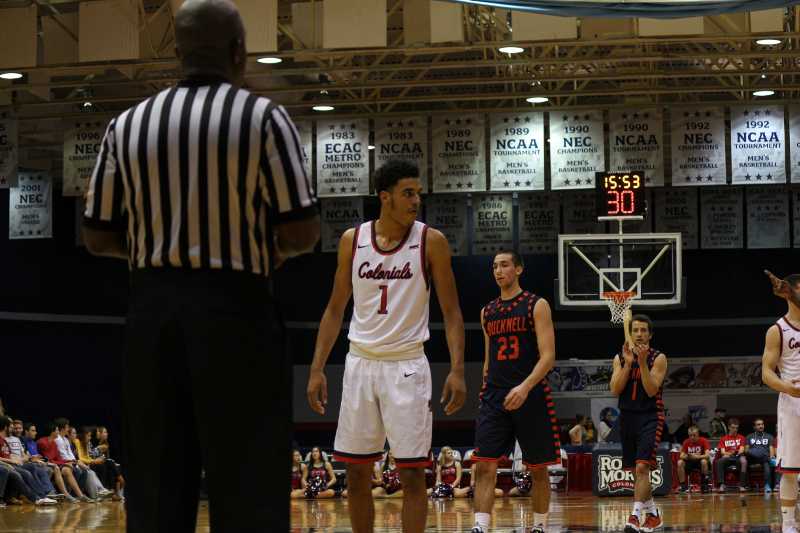 Isaiah Still's 15 points against Wagner was not enough as the Colonials fell by eight points on the road.

Looking to salvage a win at home after a five-point loss less than 48 hours ago against Central Connecticut State, the Colonials needed a win against the Bryant Bulldogs to stay in the hunt to make the Northeast Conference tournament, which is right around the corner in less than a month.

Robert Morris, now 7-18 and 5-7 in the NEC, defeated Bryant, now 7-18 overall and 4-8 in conference play. RMU used a field goal shooting percentage of 55 percent and good hustle defensively to knock off their opponent in a fan-filled arena. After being down 11-4 at the 16:06 mark of the first half, the Colonials started coming back and eventually took the lead 18-16 at around the halfway mark. This game was proof that good shooting, competitive defense, and an overall theme of “eye on the prize” will help you win a basketball game.

In the past three games against Mount St. Mary’s, St. Francis, and Central Connecticut State, the Colonials found themselves trailing early in the game and failed to make a comeback to win either of the three games. However, against Bryant, RMU fell behind early but gained momentum and fought their way back. After taking the two point advantage in the first half, the Colonials never looked back and closed out the half leading by six points via a score of 44-37.

RMU put on their dunking shoes multiple times throughout the game as senior Rodney Pryor and Billy Giles found openings in the paint and executed stylish dunks. Pryor’s slam late in the first half left the Sewall Center roaring as fans were amazed at his dunk in which he called for a pass in running motion towards the basket past a defender, left the ground feet in front of the hoop and slammed it down in  flying like motion. It was pretty evident that the slam pumped up his fellow teammates and gave them the boost of energy they needed to ensure that they were the dominant team and nobody could prevent them from taking this game from them.

The second half was much like the end of the first half. The Colonials looked to be in control of the contest and kept making it harder and harder for the Bulldogs to stay out of the dog house. Bryant found themselves down by more than 15 points for majority of the second half. The largest lead the Colonials held was by 22 points after Seth Rouse’s jumper with a little over one minute remaining in regulation gave RMU the 89-67 lead.

A lot of the Colonials success on the court Saturday came from the terrific shooting performances from Giles, freshman Isaiah Still, and Pryor. Giles totaled 23 points and 10 rebounds giving him a double-double. Not far behind in total points was Still, who finished with 22 and for the second time in three games recorded more than 20 points. Pryor finished with his fifth double-double on the year scoring 14 points and corralling 11 boards.

Saturday was the first time all season the Colonials scored more than 78 points in a game.

Robert Morris will look to improve off of this win and increase their chances of making the NEC tournament when they take on St. Francis this coming Thursday, Feb. 11 to finish off a three game home stand at the Sewall Center.