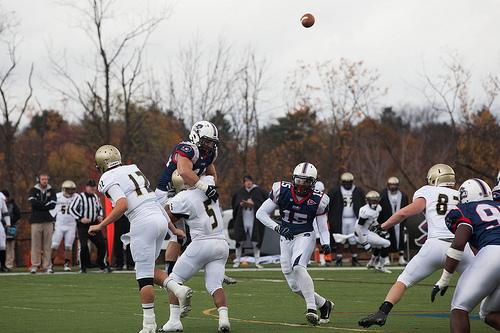 By Nick Buzzelli and Chris Mueller

When the Robert Morris football program takes the field for the first time during the John Banaszak era next year, it will be without linebacker Kimani Smith and defensive back Brian Jones.

Smith and Jones were charged with disorderly conduct stemming from a January 26th on-campus incident and are suspended from the university for one year due to a violation of university policy, which RMU athletic director Dr. Craig Coleman confirmed to Andrew Chiappazzi of ColonialsCorner.com

Jones is awaiting trial on March 27th, and Smith will pay a fine as a result of pleading guilty.

Two other Robert Morris football players, Antwan Eddie and Adrian Perez, were involved in the incident and were cited for disorderly conduct.

Eddie’s preliminary court hearing is scheduled on March 11th. Perez, a senior, is not eligible to play for Robert Morris next year, but as of now Eddie is still with the program.

Both Smith and Jones were set to be key contributors to RMU football in 2014. Last year as sophomores, Smith accumulated 39 tackles, a sack and interception while Jones recorded 20 tackles from the nickleback position.

RMUSentryMedia will continue to update this story as more information becomes available.