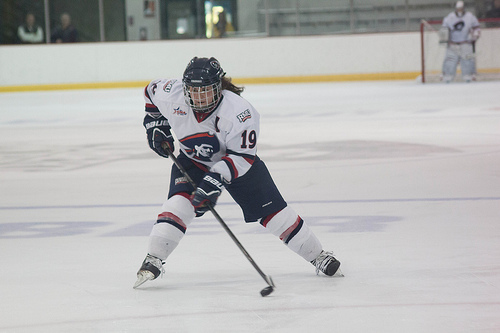 RMU couldn't pick up their tenth win losing to the Lakers 4-1 Friday evening on the road.

The RMU women’s hockey team took home its first win of the weekend against RIT Friday evening and now has tied the program win streak record with eight consecutive victories.

In a 2-1 game, the Colonials owed both of their goals to power play opportunities. The first was courtesy of forward Thea Imbrogno at the 7:12 mark in the first period, with Kristen Richards and Brittany Howard on the helpers.

“We try and work the power play off of Howard’s side. There’s a few different plays we do and I tried to draw someone out then go for a rebound,” said Imbrogno, the assistant captain.  “When Howard shot low, it went right to me and I had an open net.”

A little over five minutes into the second period, the Tigers retaliated with an even-strength goal from Celeste Brown.

As the middle period began to wind down, Howard, RMU’s freshman sensation, struck for her eleventh goal of the season. The team faced a five-on-three power play when Brittany St. James and Lindsay Grigg were sealed behind Plexiglas panes for a hooking and checking penalty, respectively.

“Tonight we made a couple of really nice plays, executed our plan pretty well and took advantage of the chances that we had,” said assistant coach Logan Bittle of the power play efforts.

The game was not without a few bumps here and there. With three checking, one tripping, one elbowing, and a few other penalties that each team contributed, the physicality of the game was clearly elevated.

“The game was pretty physical.  There were a lot of penalties, but I think we battled through it well,” Howard said.

“We’re trying not to take penalties in the especially in the offensive zone to retaliate, but that’s going to happen,” added Imbrogno.

According to Howard, the answer to winning games is simple, the Colonials just have to “work hard.”

Robert Morris hosts the Tigers once more today at the 84 Lumber Arena. Puck drop is scheduled for 3:05 p.m.