In round two of David versus Goliath…..Goliath won as Kentucky routed Robert Morris 87-49 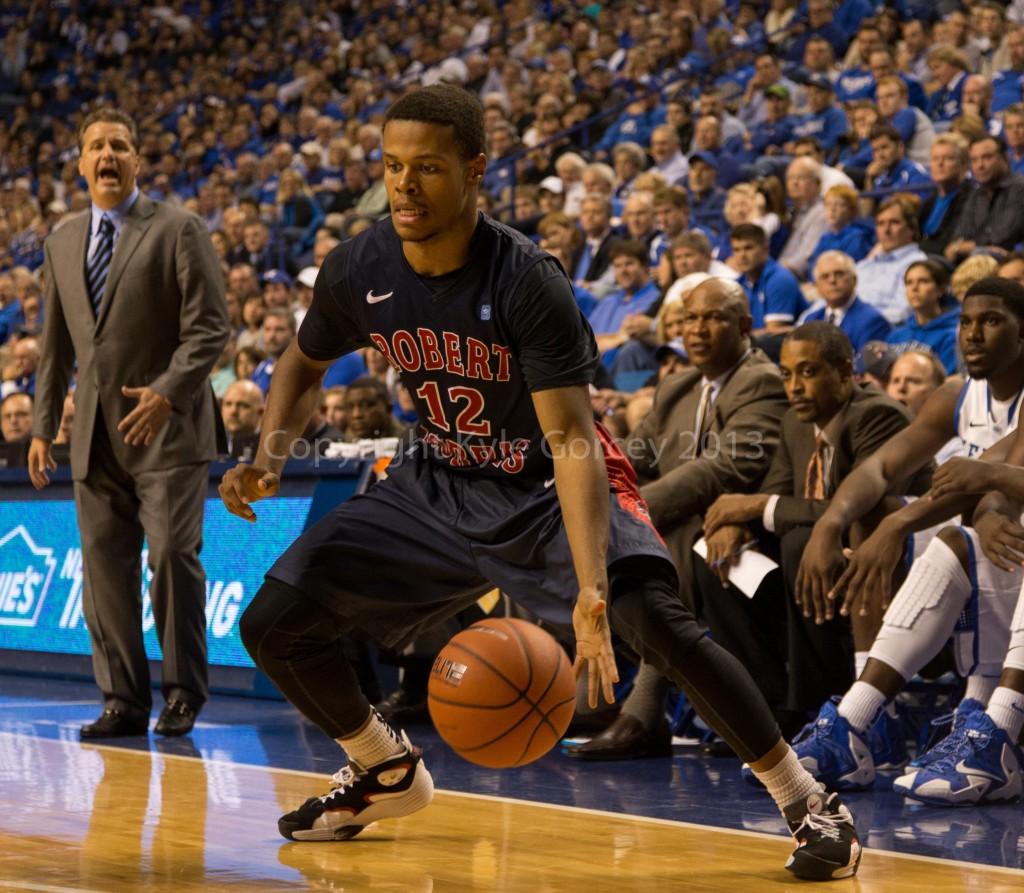 Last year, the Robert Morris men’s basketball team took on Kentucky in the first round of the NIT Tournament.

It was a dream scenario.

With Kentucky’s Rupp Arena being used for the NCAA Tournament, the Wildcats were forced to travel to Robert Morris’s Charles L. Sewall Center to take on the Colonials in an incredible atmosphere.

The Wildcats looked intimidated in last year’s match-up as they lost 59-57 in what was one of the biggest upsets in college basketball history.

Round One………the winner was David

Last night, the tables turned as it was Robert Morris would play the visitor as they traveled to Lexington to take on a much different Wildcats teams then the one they faced last March in the Sewall Center.

Goliath flexed its muscle and showed that there wouldn’t be another embarrassing loss to the hands of David. As Kentucky, led by a 28 point performance by freshman guard Aaron Harrison, routed Robert Morris 87-49 at Rupp Arena Sunday night.

The Wildcats brought in what has been called one of the greatest recruiting classes of all time, five of the top ten prospect in last year’s ESPN 150.

And Kentucky Head Coach John Calipari gave Wildcat Nation a preview of what is to come.

For the first time in the 111 years of Kentucky basketball, they took the court at Rupp Arena in front of a 21,600 members of Big Blue Nation with FIVE starting freshmen.

“If I had five freshmen that good, I would start them as well, that’s what I would make of it. I think every coach in the country is at a point know where if guys are able to compete and contribute whether freshman, sophomore, juniors or seniors, they’re going to be on the floor.”

Right from the beginning, the Colonials looked very nervous on the court trying to keep pace with Kentucky. The defense for the majority of the first half seemed to give Kentucky lots of trouble as they did their best to follow through on Toole’s game plan to protect the paint.

The offense sputtered at best, going six for 30 from the floor during the first half, barely keeping within reach of the Wildcats.

Unfortunately for Robert Morris, it was only a matter of time before Calipari’s team would break the game wide open.

It would be in the second half as Kentucky began to show why they were the preseason number one  in the NCAA. The Wildcats were surgical in running their offense, being able to force Robert Morris to have to keep up with them in their quick transition.

The Wildcats were able to take advantages of many of Robert Morris mistakes, resulting in highlight reel alley oops, which would bring the Rupp Arena crowd to its feet.

Following the game, both coaches tried to play down the events that took place on a cool Tuesday night in Moon Township last March.

For Toole, it seemed like the ending of this game was a relief.

“Obviously the buildup to this was, to me, a little bit ridiculous. Now that it’s over with and the second part has occurred, order has been restored,” he said. “You can’t take away the notoriety that we’ve gotten from it or that people were interested in it, but now I think both clubs can move forward with the rest of their season.”

While Calipari’s thoughts on last year’s game and how it affected Kentucky’s game planning were pretty simple.

“I never looked at last year’s tape to prepare for the game, I didn’t want to see it, I’ve never looked at it nor will I. That game is over with this is a new team and in the last three days we didn’t talk about Robert Morris. I’m’ concerned about my team. And I got to get this right.”

In the most recent battle of David vs. Goliath, Robert Morris got the first laugh, but as the old saying goes “Whoever laughs last, laughs the loudest.”