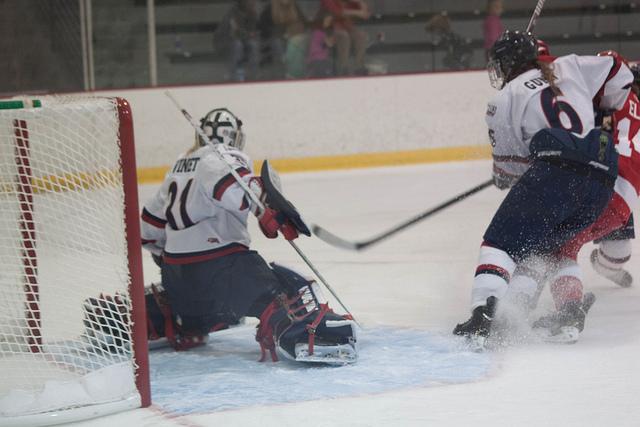 Robert Morris moves to 2-0 on the season after a 3-2 win against Providence Sunday on the road.

The RMU women’s hockey team fell to the Mercyhurst Lakers 2-0 in a physical contest Friday afternoon at the Island Sports Center.

It was a tough loss for the Colonials, who held their ground in the first period of play.

But it was the Lakers’ offense in the second period that decided the game, scoring the two goals, one of them on a power play.

However the Colonials knew that this game would not be a walk in the park. With MU being ranked ninth in the nation, they knew that they would have to be very offensive. And they came out fast.

RMU charged toward the Lakers in the first quarter with a brutal offense, delivering an onslaught of shots.

This was accompanied by a well-equipped defense that held the Lakers to only five shots in the first quarter.

All were stopped by RMU goalie Courtney Vinet, who proved that she could hang with the ninth ranked team in the country.

Vinet was tested with some near goals, one of which flew over her head and hitting the upper cross bar.

The second period, however, proved to be a momentum shifter, as RMU started to late the anger of their in-state rivals get the better of them. This led to the sacrificing of players to the penalty box and allowing MU to score both in the second and nineteenth minute of the second period.

Although both teams were well matched on offense, it was the goaltenders that decided the contest.

Both Vinet and Annaline Lauziere for Mercyhurst were named the team MVP’s.

RMU continue their series against the Lakers tomorrow at 3 p.m., where they look to even the score and improve to 5-3 at home.