Colonials head into pivotal matchup with Bryant on Saturday 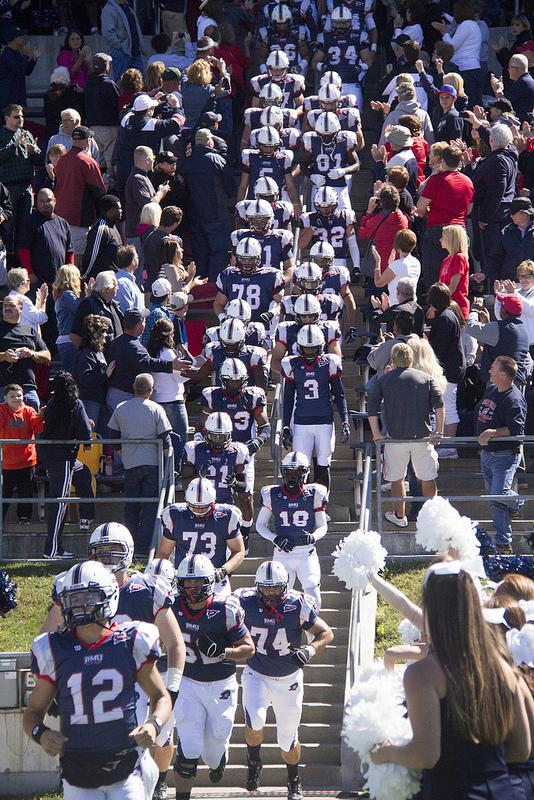 The NEC race is wide open at this point in the season, as each teams’ records explain so. All of the seven schools have at least one conference loss, making the 2013 champion unpredictable at this point.

For Robert Morris, the answer is simple. Win out the remaining four games on the season, and be crowned NEC champion. Lose one more time, and kiss any chance of a championship and FCS playoff berth goodbye.

It starts this weekend, as the Colonials have a new challenge at hand with Bryant coming into Moon Township for a Saturday afternoon affair. Both teams are heading into the contest off wins last week, but to which team does something with that momentum remains to be seen.

“Our mindset is to be there [NEC title contention], and it starts with Bryant,” said senior linebacker Kyle Cooper. “It’s a tough four-game stretch where we’ve got to win them all, and we control our own destiny in that aspect.”

Robert Morris is coming off a come-from-behind victory at Wagner, while Bryant most recently pummeled Duquesne at home. With inconsistency being a major problem for both teams, the end result is a toss-up.

“Obviously, the win against Wagner is a big lift for our team. We have to continue to play well, improve, and see what we can do against Bryant,” said assistant head coach John Banaszak.

The key for Robert Morris will be to get a sputtering offense on the right track, and having starting quarterback Paul Jones back is a good sign. Jones sat out of the Wagner game with concussion-like symptoms, but he’s looked sharp this week, being a full participant in practice.

“I didn’t have any symptoms this week,” said Jones after practice on Thursday. “I’ve felt really good.”

The junior quarterback’s mindset has remained the same: reaching their full potential as an offense.

“We’re just focusing on the little things and seeing what we can do to make plays,” he said. “I think we need to focus and play up to our level that we should be.”

The game plan for the RMU defense is centered on containing  Bryant’s senior wideout Jordan Harris, who is putting up monster numbers this season. Through eight games, Harris leads the league in both receptions (5.88) and receiving yards (98.8) per game.

“They have a playmaker in Jordan Harris. Obviously, we’re keying on him,” said Cooper. “But sometimes when your there, he still makes the play.”

Look for junior defensive back Antwan Eddie to be shadowing Harris all day. He’s the Colonials’ most viable option against a receiving threat of that caliber, and looks to be up to the challenge. With RMU struggling offensively, it will be pivotal of the defense to keep the Bulldogs off the scoreboard.

“There were a lot of different plays that contributed to their 42 points [against Duquesne],” said Banaszak. “I think we’re going to have a good defensive attack and be able to shut them down.”

Its military appreciation day at Robert Morris on Saturday, so look for some pregame festivities to honor the nation’s past and present soldiers. Kickoff is set for noon, and the game is being broadcasted on ESPN3.